Boxing Packs A Punch In Self Defense 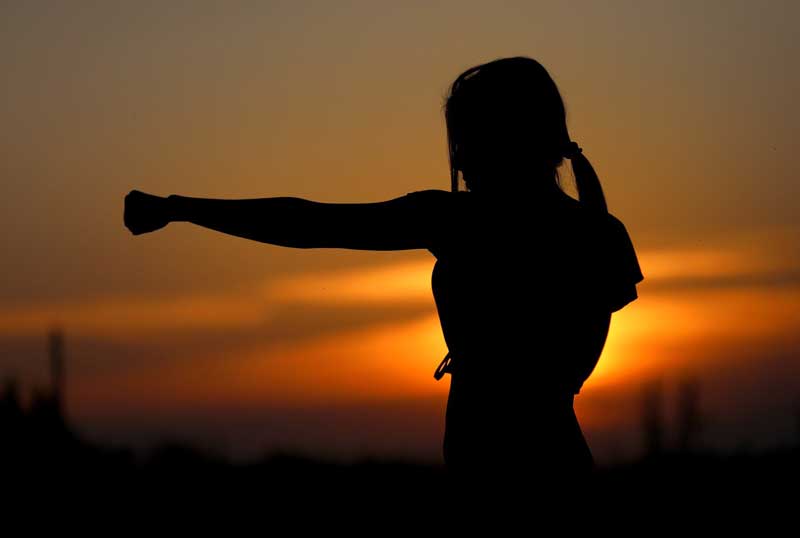 Boxing Packs a Punch in Self Defense
by Steven R. Brill
Regardless of the various dictionary, local, national or legal definitions of self-defense, this author believes that “everybody has a right to defend themselves from physical attack.”

Worldwide, people train in different martial art systems — all of which can be used to defend against physical attacks. Rock Steady Boxing (RSB) is not a martial art system, but it does have its roots in traditional boxing.

The difference between RSB and the sport of boxing is there is no actual physical contact between the Rock Steady boxers.  RSB is practiced as exercise, but it does bring with it many self-defense advantages.  The hand and footwork build strength in the arms, shoulders, core and legs; posture and footwork help improve balance and minimize falling, a painful side effect of both aging and Parkinson’s Disease (PD).

Be it planned or spontaneous, any of us can become the victim of an attack.  To become a target for thugs, one only needs to be in the wrong place at the wrong time. Something as simple as miscommunication can be the catalyst for someone losing composure and wanting to attack the target of their stress (you).  The repetitive practice of body awareness, protective stances, hand-eye coordination, power punching, vocal strength and quick reflexes that result from regular RSB class attendance increases your ability to avoid or mitigate confrontations.

In a face-to-face confrontation the first thing you must do, as stressed in RSB, is breathe. Suddenly stressed, holding one’s breath starves the muscles and the brain of oxygen, creating our own worst enemy – ourselves. Take a deep breath. Shout into the attacker’s face as you step back to create distance between you and them. The shout forces you to breathe and also gains the attention of others nearby to come to your aid.  Step away from your assailant; raise your hands into a comfortable, learned defensive boxing posture. This is both protective and sends a nonverbal message to an attacker that you are prepared to defend yourself.

If attacked, you will be stressed. Your attacker (depending on their experience level) will also be stressing. Adrenalin is released into your system. Use your adrenal flow to strengthen your position, not to weaken it. Let the world become your stage — be the better actor. Even if you are physically impaired, raise your (open) hands into a boxing posture pointing your palms directly at their face and yell “STOP!” or, “I don’t want to fight you!” or, “I don’t want to hurt you!” While not only causing a ruckus, this action gives you witnesses who can say that “you” did not want to fight if this becomes a police issue. In any event, the adrenal rush is only good for about thirty seconds – enough for your good posture, self-assurance and confidence to send the message that you are not an easy target.

Whether you realize it or not, your RSB muscle and neural memory should take you right into your fighting posture — which is what your body is practicing to do. Your assailant doesn’t know what you are capable of, but despite your fear, you are looking combative and showing strength they may not have bargained for.  Although nervous, it is important that you have the confidence to “stay in control!” There is plenty of time to be scared after the fact, so during the confrontation, do not look into your assailant’s eyes (look through them) and do not lose your composure. You are stronger than you think, and you are giving the appearance of an experienced boxer/combatant.

Unless you are a “runner,” you are probably not going to outrun the younger/stronger assailant, so save what little strength you have and stand your ground. You are the boxer! You may realize you don’t have the strength to hit but you have gained the finger accuracy to attack their eyes – then run! Your goal is to get away safely, not be assaulted.

Personally, I like verbal ju jutsu. If you can distract the individual with words and a show of confidence derived from your RSB training, you may just avoid a confrontation.

The author, Steven R. Brill, is a RAP Board Member and the author of the book: Fight Back, Self Defense for Senior Citizens (and Everybody Else).